Calcium-sensing receptor (CASR), which is mainly expressed in parathyroid chief cells and renal tubular cells, regulates phospho-calcic homeostasis by regulating the secretion of parathyroid hormone (PTH) as well as renal calcium reabsorption. Germ-line inactivating mutations of CASR cause persistent hypercalcemia with inappropriately normal or elevated PTH along with low urinary calcium extraction, which results in three phenotypes that are usually dependent on an apparent gene dosage effect. Homozygous or compound heterozygous mutations typically cause neonatal severe hyperparathyroidism (NSHPT), an autosomal-recessive disorder with life-threatening hypercalcemia and multiple fractures. Heterozygous mutations of CASR cause familial hypocalciuric hypercalcemia (FHH), an autosomal-dominant asymptomatic disorder with mild or moderate hypercalcemia. Infants that are heterozygous for CASR mutations may present neonatal hyperparathyroidism (NHPT) with moderate hypercalcemia and a marked elevation of PTH levels, which leads to apparent hyperparathyroid bone disease (1) (2) (3). They usually have a de novo heterozygous mutation or a paternally inherited mutation.

The phenotypes of mutations in CASR, however, do not always correspond to genotypes. Some homozygous mutations in CASR unexpectedly do not confer any severe clinical manifestations of NSHPT; instead, they just confer the mild phenotype of FHH (4) (5). A de novo heterozygous mutation may cause asymptomatic FHH but not NHPT (4). We herein present a case of asymptomatic hypocalciuric hypercalcemia with a de novo heterozygous mutation, S591C, which has, however, been previously reported to be responsible for NHPT with multiple fractures and bone erosion (6). The mutation was transmitted to the next generation and led to asymptomatic FHH in the pedigree we identified.

The proband (II-1, Fig. 1), a 54-year-old female referred for investigation of hypercalcemia, was the first child of non-consanguineous parents. Her medical record indicated no history of bone disease during the peripartum period. She had experienced no clinical symptoms attributable to hypercalcemia, such as frequent urination, muscle weakness, or delirium, although her hypercalcemia had been pointed out when she was 24 years old.

Biochemical characteristics of the proband

To identify whether the hypocalciuric hypercalcemia in the proband was inherited, laboratory evaluations of all of her children (III-1, III-2, and III-3, Fig. 1) were performed. The evaluations revealed hypercalcemia (12.0 mg/dl) with normal PTH (38 pg/ml) and low FECa (0.63%) in one of them (III-3, Table 2), which was consistent with the proband (II-1).

To confirm whether the kindred had a unique mutation, germ-line sequences of CASR were analyzed in the proband (II-1) and two of the three children (III-1 and III-3). All of the coding exons of CASR were amplified by PCR with genomic DNA from peripheral blood leukocytes. The amplicons were directly sequenced with BigDye Terminator Cycle Sequencing kits (v1.1) and an ABI Prism 3130XL genetic analyzer (Applied Biosystems). The proband was heterozygous for a cytosine to guanine transition at the nucleotide position 1772 in exon 7 (c.1772 C>G), which led to the replacement of serine (TCC) by cysteine (TGC) at codon 591 (S591C) (Fig. 2). Sequence analysis in the affected child (III-3) revealed the heterozygous mutation of c.1772 C>G, whereas the unaffected child (III-1) did not carry the mutation (Fig. 2). These results indicated that the FHH in the kindred was most likely associated with the S591C in CASR. Because the parents and all of the siblings of the proband had normal serum calcium levels, the mutation was likely de novo in the proband.

The proband (II-1) and the affected child (III-3) have been followed up every 6 months, so far without apparent symptoms or related abnormal laboratory findings. Therefore, no treatment for hypercalcemia has been administered.

We identified a heterozygous missense mutation, S591C, in CASR in two affected family members with asymptomatic hypocalciuric hypercalcemia. A case of NHPT carrying the heterozygous S591C has previously been described with multiple fracture and bone erosion (6). The affected family members in the present study, however, were diagnosed with benign FHH, because they did not have any severe clinical manifestations.

Increasing evidence has demonstrated clinical variability of heterozygous CASR mutants, although the mutants generally cause asymptomatic FHH. A search of the CASR database (www.casrdb.mcgll.ca) revealed that six mutations of CASR have thus far been reported in NSHPT with de novo heterozygous mutations, which is referred as NHPT (1) (2) (3). Among the six mutations, only one mutation, R220W, has been described as being responsible for both NHPT (7) and FHH (8), which is similar to the S591C we identified. In the pedigree of FHH with R220W, however, no de novo cases have been described (8). We report for the first time here that the de novo CASR mutation responsible for NHPT, S591C, can also cause just asymptomatic hypocalciuric hypercalcemia.

Another de novo heterozygous mutation, G459R, in CASR has been reported to cause asymptomatic FHH (4). In the pedigree, however, apparent hypercalcemia has been observed only in homozygous carriers because of low potency of the mutation, as verified by in vitro experiments (4). In the pedigree we identified, the heterozygous S591C caused moderate hypercalcemia and/or the development of NHPT.

It remains unclear what factor determines the differential phenotypes of the de novo heterozygous mutation of S591C, NHPT with hyperparathyroid bone disease or asymptomatic FHH without hyperparathyroidism. In NHPT, the affected CASR in the fetus senses maternal normal Ca2 + levels as ‘low’ and thus stimulates the fetal parathyroid to release PTH. Maternal vitamin D deficiency and/or low calcium intake could be other stimuli of the fetal parathyroid glands. Variable maternal environment and/or exposure in utero, as well as genetic background, including polymorphisms of other FHH-related genes, G protein subunit α11 (GNA11), and adaptor-related protein complex2 σ subunit (AP2S1), could bring about the differential phenotypes. It would be of interest if the paternal transmission of S591C caused NHPT in the pedigree we identified.

In the CASR mutant described in the present study, the serine 591 was replaced with cysteine containing a free thiol group (-SH), which easily forms a disulphide bridge with another cysteine. The residue 591 is located in the extracellular cysteine-rich domain and transmits the signal from the Ca2 +-binding domain to intracellular signaling pathways. Studies of site-directed mutagenesis have indicated the functional importance of the seven cysteine residues in the cysteine-rich domain (9). Those native cysteines likely contribute to stabilizing the conformational structure of CASR by forming intramolecular disulphide bridges (10). The replacement by cysteine at residue 591 might affect the formation of disulphide bridges and the three-dimensional structure of the extracellular domain of CASR.

In conclusion, the present report is the first case of FHH with the de novo heterozygous S591C mutation in CASR, which was previously reported as being a responsible mutation of NHPT. Variable phenotypes observed with S591C suggest the need for caution in the prediction of course and outcome in a pedigree with CASR mutation. The accumulation of data not just from genotyping but also from the evaluation of the maternal environment of carrier fetuses, as well as in vitro studies of molecular functionality, would define the factors that contribute differential phenotypes in heterozygous CASR mutations.

Written informed consent was obtained from the patient for publication of this report.

K Taki, T Kogai, and A Hishinuma analyzed the data and drafted the manuscript. K Taki was the endocrinologist responsible for the patients. T Kogai, J Sakumoto, and T Namatame performed the gene analysis.

Copyright:
This is an Open Access article distributed under a Creative Commons Attribution-NonCommercial-NoDerivs 3.0 Unported License. 2015

The sequencing chromatograms for germ-line sequence analysis of amplicon of exon 7 of CASR. Unaffected and affected sequences of part of exon 7. 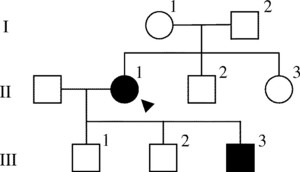