Type II amiodarone-induced thyrotoxicosis (AIT) is an uncommon cause of thyroid storm. Due to the rarity of the condition, little is known about the role of plasma exchange in the treatment of severe AIT. A 56-year-old male presented with thyroid storm 2months following cessation of amiodarone. Despite conventional treatment, his condition deteriorated. He underwent two cycles of plasma exchange, which successfully controlled the severe hyperthyroidism. The thyroid hormone levels continued to fall up to 10h following plasma exchange. He subsequently underwent emergency total thyroidectomy and the histology of thyroid gland confirmed type II AIT. Management of thyroid storm secondary to type II AIT can be challenging as patients may not respond to conventional treatments, and thyroid storm may be more harmful in AIT patients owing to the underlying cardiac disease. If used appropriately, plasma exchange can effectively reduce circulating hormones, to allow stabilisation of patients in preparation for emergency thyroidectomy.

Type II amiodarone-induced thyrotoxicosis (AIT) is an uncommon cause of thyroid storm. Due to the rarity of the condition, little is known about the role of plasma exchange in the treatment of severe AIT. A 56-year-old male presented with thyroid storm 2months following cessation of amiodarone. Despite conventional treatment, his condition deteriorated. He underwent two cycles of plasma exchange, which successfully controlled the severe hyperthyroidism. The thyroid hormone levels continued to fall up to 10h following plasma exchange. He subsequently underwent emergency total thyroidectomy and the histology of thyroid gland confirmed type II AIT. Management of thyroid storm secondary to type II AIT can be challenging as patients may not respond to conventional treatments, and thyroid storm may be more harmful in AIT patients owing to the underlying cardiac disease. If used appropriately, plasma exchange can effectively reduce circulating hormones, to allow stabilisation of patients in preparation for emergency thyroidectomy.

Type II amiodarone-induced thyrotoxicosis (AIT) is a rare cause of thyroid storm and can be challenging to manage. Little is known about the use of plasma exchange in treatment of severe AIT. Current literature provides limited guidance on initiation of plasma exchange. Case reports outlining this treatment strategy, therefore, are of great value to physicians managing this unusual clinical entity.

A 56-year-old Chinese male presented with 2-week history of fever, cough and reduced effort tolerance. He had a history of atrial fibrillation and was treated with amiodarone for 2years. Following successful catheter ablation, amiodarone was discontinued 2months before the current visit.

He was initially afebrile, stable and nontoxic at presentation but rapidly deteriorated 5days after admission with high-grade fever of 40°C, fast atrial fibrillation at a rate of 147 beats per minute and hypotension with blood pressure of 82/46mmHg. Examination revealed a lethargic looking man with jaundice. He had no goitre or neck tenderness. There were no signs of thyroid eye disease or pretibial myxoedema.

Summary of laboratory results on admission.

Thyroid function test results before and at presentation.

Deranged thyroid function at presentation, compared to results from routine tests 4 and 8 months prior to presentation.

Thermodysregulation as well as cardiac and gastrointestinal manifestations of his thyrotoxicosis contributed to a high Burch–Wartofsky score of 80 (1). A diagnosis of thyroid storm secondary to type II AIT was made, based on the clinical findings (absent thyroid bruit and thyroid eye disease) and results of the thyroid uptake scan and TSH receptor antibody titre.

He was initially treated with oral propranolol 20mg every 8h, intravenous hydrocortisone 100mg every 6h, intravenous digoxin 500μg once, oral propylthiouracil 400mg once, Lugol’s iodine 10mL once and intravenous piperacillin/tazobactam 4.5g once.

Propylthiouracil and Lugol’s iodine solution were stopped the following day as they were of no therapeutic benefit in type II AIT. He was continued on intravenous steroids. Cholestyramine was initiated as an adjunctive therapy. In addition, his tachycardia was refractory to escalated doses of propranolol. Intravenous digoxin also failed to control his heart rate. Intravenous esmolol infusion was initiated and titrated up to 200μg/kg/min, without achieving satisfactory rate control.

At this point, it was clear that the patient had fulminant thyrotoxicosis that was not responding to conventional medical treatment, and therapeutic options were limited by the severe derangement of his liver function. Hence, a decision was made to initiate early plasma exchange as a bridging therapy to emergency thyroidectomy.

Plasma exchange, with no anticoagulation, was performed the next day with right femoral vein double lumen dialysis catheter as angio-access. Plasma was separated by the membrane separation technique, using a PlasmaFlux P2 Dry filter mounted on Fresenius 4008S ARrT Plus platform (Fresenius Medical Care, Bad Homburg, Germany). Fresh frozen plasma (FFP), 3L, was used as exchange fluid. Heart rate improved from 126 beats per minute at the initiation time to 107 beats per minute on completion of the first cycle of plasma exchange. Systolic blood pressure was maintained between 133 and 158mmHg. Free triiodothyronine (FT3) and free thyroxine (FT4) levels improved markedly following the first exchange (Table 3). These values were carefully trended every 4–6h, so that any rise of circulating thyroxine levels could be detected early (Fig. 1).

Liver function had improved significantly (alanine transaminase 216U/L and aspartate transaminase 297U/L) by the second day of plasma exchange. He then underwent a second cycle, with 2.5L of FFP and 0.5L of 5% human albumin solution as exchange fluid. This successfully brought down his FT3 level to the normal range. Other biochemical and haematological markers that were closely monitored included serum calcium (risk of citrate-induced hypocalcaemia) and coagulation profile (possible removal of clotting factors during plasma exchange).

Type II AIT is a rare cause of thyroid storm. A recent case series from our institution described Graves’ disease as the predominant aetiology of thyroid storm (2). The main challenges in the management of our patient were his rapid clinical deterioration from thyroid storm and gaps in the current literature to guide us on the timing and frequency of plasma exchange.

Plasma exchange as a treatment modality in management of thyroid storm, though rare, is not new. By exchanging the patient’s plasma with the donor’s plasma and/or human albumin solution, it is hoped that a lower level of circulating thyroid hormone can be achieved.

In 1970, Ashkar and co-workers first described the use of blood exchange and plasmapheresis in treatment of “thyrotoxic crisis” (3). Forty-three years later, the American Society for Apheresis (ASFA) 2013 guidelines on the use of therapeutic apheresis listed thyroid storm as a category III indication (optimum role of apheresis therapy is not established, decision making should be individualised) for therapeutic apheresis (4). The level of evidence is low due to lack of robust data in this area, but this is unlikely going to change in the near future due to the sheer rarity of the condition.

In the absence of clear guidelines and recommendations on the use of plasma exchange in treatment of patients with thyroid storm or severe thyrotoxicosis, the decision to utilise this modality of therapy has to be made by the treating physician.

Our patient with severe AIT was particularly difficult to treat. The long half-life and large volume of distribution of amiodarone contribute to the sustained effect of amiodarone on thyroid function (5). As the pathogenesis of AIT can be heterogeneous, response to various components of conventional thyroid storm treatment is also limited. Type II AIT does not respond to anti-thyroid drugs. Pre-existing iodine saturation in the thyroid gland in such patients means that further iodine uptake will be minimal, hence the likely futility of iodine solution. Patients with severe AIT and thyroid storm can be potentially good candidates for plasma exchange. Multiple mechanisms of action have been proposed, such as removal of free and protein-bound hormones, iodine, inflammatory cytokines, amiodarone and autoantibodies (4).

When using plasma exchange as a bridging therapy to definitive treatment, that is, total thyroidectomy, a few factors pertaining to the technicalities have to be considered, namely, the timing of initiation of plasma exchange, the type of replacement fluid used and the number of exchanges needed before surgery.

Timing of initiation of plasma exchange

The ASFA guidelines on the use of therapeutic apheresis in clinical practice highlighted the advantages of using plasma as a replacement fluid, due to its ability to increase the concentration of thyroglobulin to bind free thyroid hormone (4). Other advantages of using FFP include the presence of clotting factors and immunoglobulins. The laboratory tests of our patient revealed raised transaminases and prolonged prothrombin time, indicating a degree of hepatic impairment, and hence an impaired hepatic synthetic function. This limits the regeneration of clotting factors and immunoglobulins. If such proteins are removed during plasma exchange and not replaced accordingly, coagulopathy and immunocompromised state may ensue. Risks associated with use of FFP include anaphylactoid reactions, viral transmissions and citrate toxicity. FFP contains 14% citrate by volume, and chelation of calcium by citrate may lead to hypocalcaemia (6).

Number of exchanges needed before surgery

The aim of plasma exchange for our patient was to reduce the level of circulating thyroid hormone such that he would be fit to undergo emergency thyroidectomy under general anaesthesia. There is no consensus or guideline on the number of exchanges necessary. Muller and co-workers reviewed the literature and analysed cases of thyroid storm requiring plasma exchange (7). There is great heterogeneity in the indications for plasma exchange, as well as the definitions of clinical improvement and hence clinical endpoint. Nonetheless, the median number of exchanges required ranged from 1 to 6. In case reports specific to AIT, patients generally underwent a sufficient number of exchanges to render their FT3 levels normal or near normal, before total thyroidectomy took place (8).

We observed in our patient that after the completion of each cycle of plasma exchange, both the serum FT3 and FT4 levels continued to decrease, for up to 7–10h. This can probably be explained by the availability of new thyroid hormone-binding sites offered by proteins in the FFP, allowing for a constant equilibration of the hormone between free and bound states.

Plasma exchange is not without its risks, and thus cannot be recommended as standard treatment for type II AIT. It should not be offered to patients with stable cardiac disease and delayed response to AIT therapy. Complications of plasma exchange include citrate-induced hypocalcaemia, coagulation abnormalities, infection, electrolyte abnormalities, and hypotension (6). When complications arise, plasma exchange may need to be terminated (9). In our patient, we monitored his serum calcium level closely following thyroidectomy, as postoperative hypoparathyroidism can further cause disturbance to calcium homeostasis. Coagulation profile was also checked to minimise the risk of bleeding in the peri-operative period.

This case highlights the important of prompt diagnosis of AIT and early initiation of treatment. When conventional treatments fail, however, plasma exchange may be useful as a bridging modality to definitive therapy in selected unstable patients with severe AIT and thyroid storm.

This research did not receive any specific grant from any funding agency in the public, commercial, or not-for-profit sector.

Written informed consent has been obtained from the patient for publication of the submitted article and accompanying images. 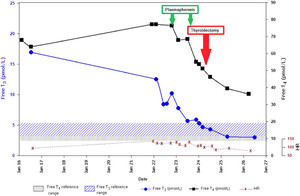