The 85% of cases of primary hyperparathyroidism (PHPT) are due to parathyroid adenomas (PA) and less than 1% to parathyroid carcinomas (PC). The PA usually measure <2 cm, weigh <1 g and generate a mild PHPT, whereas the PC usually exceeds these dimensions and are associated with a severe PHPT. However, giant PA (GPA), which is defined as those larger than 3 g, has been documented. Those may be associated with very high levels of PTH and calcium. In these cases, their differentiation before and after surgery with PC is very difficult. We present a case of severe PHPT associated with a large parathyroid lesion, and we discuss the differential aspects between the GPA and PC.

The 85% of cases of primary hyperparathyroidism (PHPT) are due to parathyroid adenomas (PA) and less than 1% to parathyroid carcinomas (PC). The PA usually measure <2 cm, weigh <1 g and generate a mild PHPT, whereas the PC usually exceeds these dimensions and are associated with a severe PHPT. However, giant PA (GPA), which is defined as those larger than 3 g, has been documented. Those may be associated with very high levels of PTH and calcium. In these cases, their differentiation before and after surgery with PC is very difficult. We present a case of severe PHPT associated with a large parathyroid lesion, and we discuss the differential aspects between the GPA and PC.

Primary hyperparathyroidism (PHPT) is one of the most common endocrine diseases, and more than 90% of the cases are due to benign causes (parathyroid adenomas (PA) and multigladular hyperplasias) and less than 1% are due to PC. Parathyroid carcinoma (PC) and giant parathyroid adenoma (GPA) are considered uncommon causes of PHPT. These usually present a series of clinical, analytical and radiological features, which are useful to differentiate them from the usual causes of PHPT. However, GPA and PC have several common characteristics, which may make it difficult to differentiate them, especially in cases of non-invasive/metastatic disease (1, 2). We present a case of a GPA and make a review of the literature, quoting the most important differential aspects between GPA and PC.

We present the case of a 40-year-old woman who consulted for pain in the anterior cervical region of 2 weeks of evolution without other associated symptoms. Thyroid function tests were normal, and on physical examination, a 1 cm nodule was palpated in the left thyroid lobe (LTI). The thyroid ultrasound showed a solid lesion of 6.4 × 1.6 × 2 cm, behind the LTI (Fig. 1) and in the serum analysis: total calcium: 12.8 mg/dL, corrected calcium: 13.4 mg/dL and creatinine: 0.69 mg/dL. The study was completed with the following studies: PTHi 825 pg/mL (14–72); bone densitometry: generalized osteopenia; bone series: no alterations and parathyroid scan: intense uptake in back of the LTI, in early and late phases (Fig. 1). In view of these findings, the patient was diagnosed with HPTP by left GPA vs left PC.

Surgical treatment was scheduled; after that the patient was treated with zoledronic acid and hydration to control the hypercalcemia. The day before surgery, the patient was treated with oral calcium and calcitriol to minimize the risk of postoperative hypocalcemia. She was operated by a traditional approach in May 2016. The surgeon identified a large solid nodule encompassed by the thyroid capsule. It extended from the lower pole to the upper pole of the LTI and occupied the entire space between the esophagus and the hemithyroid, to which it was firmly attached. After the excision of the lesion, the intraoperative PTH dropped from 752 to 70 pg/mL. Prophylactic administration of calcium and calcitriol was initiated, and the calcemia reached a nadir of 8.3 mg/dL at 24 h of surgery. There were no difficulties for the management of hypocalcemia during the postoperative period, two months after surgery, the administration of calcium and calcitriol was interrupted. The dimensions of the lesion were 6.4 × 1.6 × 2 cm and its weight was 10.8 g. The histological study showed a proliferation of main cells without atypia or fibrous bands. The ki-67 was 2%. The immunohistochemical staining for parafibromin was clearly positive (Fig. 1).

In the absence of invasion of adjacent structures and distant metastases, the differentiation between GPA and PC is a diagnostic challenge.

In line with higher levels of calcium, the symptoms of hypercalcemia are more frequent and severe in PC than those in PA in general (2, 3). Interestingly, a recent study has shown that GPAs are more frequently asymptomatic than non-giant PA, despite higher levels of calcium (4). Therefore, it could be speculated that in large lesions with marked hypercalcemia, the absence of symptomatology would indicate that this lesion may be more likely to be GPA than a PC, but there are no studies that have explored this point.

Echographically, PC and GPA are presented as hypoechoic masses, but PCs tend to have a lobulated and heterogeneous appearance, whereas GPAs have smooth borders and homogeneous echogenicity. The depth/width ratio seems to be the ultrasound parameter with greater discriminatory capacity. This is larger than 1 in 95% of PCs and smaller than 1 in 94% of GPAs (5).

On the other hand, FNA has a low discriminatory capacity to differentiate between benign and malignant parathyroid lesions, so its use is not recommended to differentiate GPA from PC. In addition, in the case of PC, there may be a risk of tumor dissemination with the FNA (6).

Macroscopically, PCs usually are grayish–whitish, firm in consistency, with a rounded shape, and they are usually surrounded by a dense fibrous capsule. The GPAs tend to be bright reddish or brown, soft and ovoid. However, up to 20% of the GPAs and PCs can be classified erroneously if only these parameters are taken into account (7).

The histological differentiation between PC and PA is not easy either. In 1973, Schantz and Castleman proposed the following morphological criteria to identify PC: presence of dense fibrous bands, trabecular architecture, vascular and capsular invasion and mitotic activity. Unfortunately, further studies demonstrated that the sensitivity and specificity of each isolated criterion is limited (8). However, the simultaneous presence of several of them is common in PC and rare in PA.

The loss of staining for parafibromin, a product of the HRPT2 gene (involved in the pathogenesis of PC) has a sensitivity of 67–96% and a specificity of 99% for the diagnosis of PC. As a result, a negative staining is practically diagnostic of PC and a positive staining usually corresponds to a benign lesion. Ki-67 is usually higher in PC, and although there is not a cutoff that establishes diagnosis, the risk of PC increases with values higher than 5% (9).

In the present case, the absence of clinic despite the markedly elevated levels of calcium and PTH, the ultrasound aspect of the lesion, with a depth/width ratio of 0.8, low ki-67 and the absence of suspicious characteristics in the histological study, suggested that the lesion was a GPA and not a PC. The positive staining for parafibromin also supported the diagnosis of GPA, although it does not definitively rule out a PC.

This research did not receive any specific grant from any funding agency in the public, commercial or non-profit sector.

We confirm that written informed consent was obtained from the patient for publication of the submitted article and accompanying images. 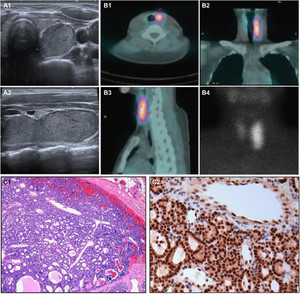