An FSH and TSH pituitary adenoma, presenting with precocious puberty and central hyperthyroidism

The vast majority of nonfunctioning pituitary adenomas (NFPAs) are either diagnosed incidentally on imaging studies performed for unrelated reasons or present with symptoms and signs of mass effect such as headache and visual field abnormalities (1, 2). Over 50% of NFPA are of gonadotrope differentiation since they immunostain for βLH (luteinizing hormone), βFSH (follicle stimulating hormone) or α-subunit, as well as for SF-1 (steroidogenic factor-1), while they are non-reactive to Pit-1 (pituitary transcription factor 1) (2). However, gonadotrophinomas seldom result in a hormonal hypersecretion syndrome because the peptides they synthesize are either not secreted or constitute hormone fragments devoid of biological activity (1, 2). A few of these gonadotrophinomas do secrete biologically active hormones, usually FSH, and are known as functioning gonadotrophin-producing adenomas (FGA) (3). These FGA can result in isosexual central precocious puberty in children of both sexes, menstrual irregularities and ovarian hyperstimulation in premenopausal women and testicular enlargement in males (3).

We hereby present the case of a young woman with a history of isosexual, central precocious puberty during childhood, who 10 years later was found to have a mixed FSH- and TSH-producing adenoma resulting in central hyperthyroidism.

A 19-year-old woman was referred to the Neuroendocrinology Clinic because of headaches and abnormal thyroid function tests. A throbbing, fronto-parietal headache developed approximately one year before and had become progressively worse over the 2 months prior to presentation, occurring daily and being partially relieved by non-narcotic analgesics; it was not associated with nausea, vomiting or visual abnormalities. She also complained of anxiety, insomnia and occasional palpitations for about 6 months, but specifically denied acral changes and galactorrhea. She did not smoke or abuse alcohol or recreational drugs; her family history was unremarkable.

Her medical history was notable for central preco­cious puberty diagnosed at 7 years of age when she had the onset of secondary sexual characteristics, including the development of mammary glands and the appearance of axillary and pubic hair, which was followed by the initiation of menses. At 10 years of age, she presented to another hospital with acute lower abdominal pain and ultrasound examination revealed the presence of large, bilateral ovarian cysts, measuring over 15 cm in their largest diameter. She underwent surgical exploration and was subjected to bilateral oophorectomy. The pathological diagnosis was that of giant follicular cysts. Thereafter, she was intermittently treated with oral contraceptives until age 15 years, when they were stopped because of recurrent mastitis. She remained amenorrheic, except for the periods of time when she received oral contraceptives.

On physical examination, her blood pressure was 120/70 mmHg, pulse 96 and regular, temperature 36.5°C, height 1.49 m, weight 54 kg (body mass index of 24). Optic fundi was normal, with no papilledema, as was the examination of visual fields by confrontation (later confirmed by Goldmann perimetry), and there was no evidence of oculomotor abnormalities. Her thyroid gland was palpable but normal in size and consistency, with no evidence of nodules or goiter. She had mild fine distal tremor and deep tendon reflexes were increased, but no focal neurological signs were found. Her breasts were asymmetric in size (left larger than right); axillary and pubic hair were present but scant.

Hormonal levels before and 3 months after transsphenoidal surgery.

She underwent transsphenoidal resection of the pituitary macroadenoma successfully. Three months after surgery, the patient’s headaches had resolved and the anxiety, insomnia and palpitations were much improved. LH and FSH levels had decreased considerably compared to preoperative values but remained in the postmenopausal range; free T4 concentrations had decreased to within the normal range and both, the somatotrophic and corticotrophic axes remained intact (Table 1). Postoperative MRI revealed a complete resection of the lesion and a partial empty sella. She was started on daily oral estradiol along with medroxyprogesterone the last 10 days of the month.

Pathological examination of the surgical specimen reported a chromophobe adenoma on hematoxylin and eosin staining, with a predominantly trabecular pattern and occasional pseudorosette formation (Fig. 2). Immunohistochemistry for growth hormone (GH), PRL and adrenocorticotrophin hormone (ACTH) was negative, whereas there was strong immunostaining for both FSHβ and TSHβ. Double immunostaining with anti-FSHβ and anti-TSHβ antibodies revealed that these hormones were produced by two different populations of cells. Cam 5.2 immunostaining showed a diffuse cytoplasmic pattern, compatible with a densely granulated adenoma, and the Ki-67 proliferative index was 1–2% and restricted to TSH-positive cells (Fig. 2).

This young woman presented clinically with headache and mild symptoms of thyrotoxicosis as well as with biochemical evidence of inappropriate TSH secretion, suggestive of a thyrotropinoma. MRI demonstrated the presence of a pituitary macroadenoma with suprasellar extension, which was successfully resected and proved to be a densely granulated, bihormonal FSH- and TSH-producing adenoma. Symptoms of hyperthyroidism and those resulting from the mass effect of the lesion resolved upon removal of the adenoma. Several aspects of this case are noteworthy:

Perhaps the most striking feature is the history of precocious puberty during childhood that resulted in ovarian hyperstimulation and the development of giant ovarian cysts. She underwent bilateral oophorectomy and was started on oral contraceptives that she used intermittently. The fact that she was diagnosed more than 10 years later with a FSH-producing pituitary adenoma makes us speculate that her central precocious puberty and ovarian hyperstimulation could have been due to the excessive secretion of biologically active FSH.

Ovarian hyperstimulation leading to the formation of giant ovarian cysts has been recognized to occur in the context of functioning FSH-secreting adenomas in premenopausal women (3). It was first described by Djerassi and coworkers in 1995 in a 39-year-old woman who presented with galactorrhea and menstrual abnormalities, along with an elevated serum FSH and estradiol concentrations and very low LH levels, occurring in the context of a large and recurrent pituitary macroadenoma (4); upon TRH administration, her LH concentrations increased by almost 70%, whereas her FSH levels did not change (4). She was subjected to transsphenoidal resection of her pituitary tumor, which upon detailed immunohistochemical evaluation, was found to be composed of nests and sheets of epithelial cells with a pale eosinophilic cytoplasm, strongly immunoreactive for α-subunit and focally for βFSH and with negative βLH immunostaining (4). Twenty-six similar cases have since been reported in the English literature (3). Since central precocious puberty in girls is usually regarded as being idiopathic, once it is biochemically documented, many of these patients do not undergo brain-imaging evaluation (5). This was probably the case in our patient and the reason why her pituitary adenoma was not discovered at an earlier stage. The differential diagnosis of central precocious puberty includes arachnoid cysts, ependymomas, germ cell tumors, low-grade gliomas, craniopharyngiomas, hypothalamic hamartomas, hydrocephalus, radiation to the CNS, primary hypothyroidism and genetic causes such as gain-of-function mutations of the kisspeptin gene as well as loss-of-function mutations of the MKRN3 gene (5). Pituitary adenomas in general and FGA in particular are very rare in childhood (6). Although still very infrequent, isosexual central precocious puberty due to FGA is somewhat more frequent in males than in females (3). In a series of 15 children diagnosed with pituitary microadenomas, Di Rocco and coworkers described the cases of two girls aged 9 and 10 years who presented with precocious puberty; formal documentation that their respective microadenomas were in fact gonadotropin producing is lacking, because this occurred prior to the emergence of immunohistochemistry (7). Tashiro and coworkers reported the case of a 10-year-old girl with a FSH-secreting adenoma and prominent ovarian enlargement due to giant cysts (8) and Gryngarten and coworkers described a very similar case occurring in an early pubertal 13-year-old girl (9). In both of these last two cases, the timely diagnosis and surgical treatment of the pituitary adenoma resulted in resolution of the giant ovarian cysts (8, 9). In contrast, the lack of an adequate and precise diagnostic work-up in our patient when she presented with the giant ovarian cysts unfortunately resulted in her being subjected to a bilateral oophorectomy.

TSH-producing tumors are frequently plurihormonal, usually co-secreting GH and to a lesser extent PRL (10). GH and PRL co-secretion by thyrotropinomas has been reported to occur in 25–50% of the patients (11, 12). This is in line with the fact that thyrotropes, somatotrophs and lactotropes share the same Pit-1-dependent differentiation lineage (10). Although gonadotrope cell differentiation is not Pit-1 but SF-1 dependent, there are a few reports of patients with thyrotrophinomas whose tumors co-secrete FSH, most of them being bimorphic (13). In fact, this seems to be the case in our patient, whose tumor’s immunohistochemical analysis revealed that it was composed of two distinct population of cells, one that immunostained for TSH and another one for FSH.

This research did not receive any specific grants from any funding agency be it in the public, private or non-for profit sector.

Guadalupe Vargas and Virgilio Melgar were, respectively the treating endocrinologist and endocrine fellow in charge of the clinical and biochemical evaluation of the patient; Lourdes Balcazar and Montserrat Magriña, both current endocrine fellows collected and organized the clinical material and reviewed the literature; Javier Baquera was the pathologist in charge of the histopathological and immunohistochemical study of the excised pituitary tumor; Moisés Mercado and Baldomero Gonzalez analyzed the clinical, biochemical, imaging and pathological material, reviewed the literature and prepared the manuscript.

Histopathology and immunohistochemistry of the excised tumor. (A) H & E staining (40×, 100× in the inset) of the tumor showing a trabecular pattern and occasional pseudorosette formation (black arrow). (B) Double immunostaining with anti-TSH (brown) and anti-FSH (red) antibodies, labeled with diaminobenzidine and alkaline phosphatase, respectively, showing two distinct populations of cells (40×, 100× in the inset). (C) Ki-67 proliferative index (MIB-1) of 1–2% (positive nuclei are stained in red), mainly restricted to TSH-positive cells (400×). 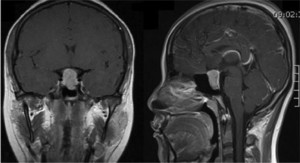