A 51 year old man presented with sepsis in the setting of thioamide-induced agranulocytosis. Empiric broad-spectrum antibiotics was followed by directed narrow-spectrum antibiotics, and his neutrophil count recovered with support from granulocyte-colony stimulating factor (G-CSF) analogue transfusions. After a brief period of multi-modal therapy for nine days including potassium iodide (Lugol’s iodine), cholestyramine, propanolol and lithium to temper his persisting hyperthyroidism, a total thyroidectomy was performed while thyroid hormone levels remained at thyrotoxic levels. Postoperative recovery was uncomplicated and he was discharged home on thyroxine. There is limited available evidence to guide treatment in this unique cohort of patients who require prompt management to avert impending clinical deterioration. This case report summarises the successful emergent control of thyrotoxicosis in the setting of thioamide-induced agranulocytosis complicated by sepsis, and demonstrates the safe use of multi-modal pharmacological therapies in preparation for total thyroidectomy.

A 51 year old man presented with sepsis in the setting of thioamide-induced agranulocytosis. Empiric broad-spectrum antibiotics was followed by directed narrow-spectrum antibiotics, and his neutrophil count recovered with support from granulocyte-colony stimulating factor (G-CSF) analogue transfusions. After a brief period of multi-modal therapy for nine days including potassium iodide (Lugol’s iodine), cholestyramine, propanolol and lithium to temper his persisting hyperthyroidism, a total thyroidectomy was performed while thyroid hormone levels remained at thyrotoxic levels. Postoperative recovery was uncomplicated and he was discharged home on thyroxine. There is limited available evidence to guide treatment in this unique cohort of patients who require prompt management to avert impending clinical deterioration. This case report summarises the successful emergent control of thyrotoxicosis in the setting of thioamide-induced agranulocytosis complicated by sepsis, and demonstrates the safe use of multi-modal pharmacological therapies in preparation for total thyroidectomy.

Thioamide-induced agranulocytosis is an uncommon but potentially serious complication. In the absence of infection, antithyroid medication can normally be ceased and other management options considered, such as radioactive iodine therapy or total thyroidectomy. When the patient also presents with sepsis and remains thyrotoxic, the risks of performing surgery on an immunosuppressed patient in this setting are largely unknown, but potentially high. Although the safety and efficacy of the therapies used in this case have been previously reported, there are few data to support combined anti-thyroid medication therapy to prepare for safe total thyroidectomy. This case highlights the potential seriousness of agranulocytosis secondary to thioamide therapy, and importantly, it demonstrates the safety of performing total thyroidectomy in thyrotoxic patients when necessary.

He was commenced on carbimazole 10 mg three times daily orally and propanolol 40 mg twice daily orally (Fig. 1). One month later, he was transferred from a rural hospital to the same regional tertiary hospital with a temperature of 39.1 degrees celsius and systemic features of infection including diaphoresis, nausea and sinus tachycardia.

He did not exhibit clinical findings of a goitre, orbitopathy, ophthalmopathy, dermopathy, periorbital oedema or nail changes consistent with Graves’ disease.

Laboratory investigations on presentation demonstrated agranulocytosis one month after commencement of carbimazole for a new diagnosis of Graves’ disease.

A diagnosis of Graves’ disease was confirmed with an elevated TSH-receptor autoantibody titre of 1.9 U/L at first hospital admission, increasing to 3.7 U/L one month later on repeat testing (reference range: <1.8 U/L). Although a thyroid ultrasound was performed prior to thyroidectomy, a thyroid nuclear uptake scan was not performed in this case.

Carbimazole was ceased immediately (Fig. 1). Piperacillin-tazobactam 4.5 g three times daily intravenously was commenced as empiric therapy for sepsis of unknown focus. This was changed to amoxicillin/clavulanic acid 875 mg/125 mg twice daily orally when the neutrophil count was >0.5 × 109/L and culture revealed MSSA, and continued for seven days. A G-CSF analogue, filgrastim, was commenced at 300 µg daily subcutaneously for three days, increased to 480 µg daily subcutaneously for three days, and ceased when the neutrophil plus bands count reached a total of 1 × 109/L.

The patient developed persistent hypertension and an increased pulse rate during his admission, raising concerns for emerging thyroid storm. His blood pressure peaked at 195/85 and pulse rate at 100 beats per minute despite doses of propanolol which commenced at 40 mg twice daily orally, and increased in increments to 80 mg four times daily prior to thyroidectomy.

Within five days of ceasing carbimazole, his T3 levels had increased sharply to 33.4 pmol/L and T4 to 39.7 pmol/L. He was commenced on lithium 500 mg daily orally, cholestyramine 4 g three times daily orally, and Lugol’s iodine five to seven drops three times daily orally in preparation for total thyroidectomy, which was performed by Ear Nose & Throat Surgeons on day nine of admission (Fig. 1). A lithium level of 0.2 mmol/L (therapeutic range: 0.5–1.0 mmol/L) was performed three days after commencement of lithium.

The patient was discharged home following successful total thyroidectomy. There were no complications from surgery, specifically with regard to bleeding, recurrent laryngeal nerve injury or hypoparathyroidism. He has remained stable on thyroid hormone replacement therapy, with regular thyroid function monitoring with his General Practitioner. At follow up nine months post surgery he remained euthyroid on replacement thyroxine (Fig. 1) with a TSH of 4.0 mU/L and a T4 of 13.1 pmol/L.

Agranulocytosis caused by thioamides is uncommon, with incidence considered to be around 0.2% and almost always developing in the first 90 days of commencement of therapy (1, 2). Although the mechanism is not entirely known, it is thought that a myelosuppressive effect on granulocyte production leads to suppression of neutrophil development, possibly due to anti-granulocyte auto-antibodies and/or direct toxicity at the haematopoietic stem cell level (2).

There are a number of pharmacological options used historically as monotherapy when thioamides are contraindicated in hyperthyroid patients. They each have a unique mechanism of action, which are likely to be synergistic.

Propanolol is a beta-blocker used to attenuate hyperadrenergic symptoms of palpitations, anxiety, heat intolerance, shortness of breath and tremor (1). At a starting dose of 40–160 mg daily, it has an advantage over other beta-blockers in helping decrease the peripheral conversion of T4–T3 by being more lipid soluble and through inhibition of the 5-monodeiodinase enzyme (1). A study published in NEJM in 1978 reported a series of 100 patients with thyrotoxicosis who underwent successful subtotal thyroidectomy following treatment with propanolol as monotherapy, without major perioperative or postoperative morbidity and importantly, with no cases of thyroid storm (3).

Lithium has a number of beneficial actions in the treatment of thyrotoxicosis. Firstly, it inhibits the coupling of iodotyrosine residues preventing synthesis of T4 and T3, likely through inhibiting the action of TSH on the cyclic adenosine monophosphate (cAMP) second messenger system (4). Secondly, it inhibits thyroid hormone release from the follicular cell (4). Finally, it acts as an adjunct to radioactive iodine treatment by promoting its retention in the thyroid gland (4).

Lugol’s iodine exerts its effect primarily via the autoregulatory Wollf-Chaikoff effect of inhibiting iodination of thyroglobulin due to large influx of exogenous iodide to suppress new thyroid hormone synthesis (1). It has the added benefit of reducing thyroid gland vascularity and risk of bleeding in thyroidectomy, supporting its role in mitigating the risk of postoperative haemorrhage (1, 5).

Corticosteroids reduce the conversion of T4 to T3 and thyroid hormone release from the follicular cell, and although not administered to this patient, have previously been recommended for rapid preparation of emergent thyroid surgery (7). They are also used to treat and hinder the progression of established ophthalmopathy associated with Grave’s disease (8).

There are little available data to support combined pharmacological therapy regimes for hyperthyroidism or for urgent surgical intervention when a patient presents profoundly thyrotoxic with the added burden of neutropaenic sepsis. The 2016 American Thyroid Association guidelines for management of hyperthyroidism recommend that patients with Graves’ disease be rendered euthyroid with methimazole prior to thyroidectomy, and support combined use of beta-blockade and potassium iodide in the preoperative period (9). They also acknowledge that if the need for thyroidectomy is urgent or it is not possible to render a patient euthyroid, the patient should then be adequately treated preoperatively with beta-blockade and potassium iodide, and priority made for a surgeon and anaesthetist with suitable experience (9).

Radioactive iodine therapy has been used for hyperthyroid patients to successfully render them euthyroid in the setting of thioamide-induced agranulocytosis, and may represent a safe treatment alternative for patients with a more stable clinical presentation (10). Prior iodine exposure from two recent CT scans with intravenous iodine would require a clinically unacceptable delay for radioactive iodine therapy in our patient, who remained symptomatic in the setting of increasing thyroid hormone levels following cessation of carbimazole. Secondly, standard practice in Australia is to continue thioamide therapy to control hyperthyroidism following radioactive iodine administration until the patient is rendered euthyroid. The thioamide-induced agranulocytosis in this case represented a contraindication for ongoing thioamide therapy.

There are published case reports describing a potential role for plasmapheresis to control thyroid hormone levels and thyroid storm in the preoperative management of patients with thioamide-induced agranulocytosis (11, 12). However, the most recent American guidelines on the use of therapeutic apheresis do not support the use of plasmapheresis to manage thyroid hormone excess and was therefore not considered in this case (13).

A major concern has always been the potential for thyroid storm induced by the trauma of surgery in patients who are already hyperthyroid. However, there are many case reports of successful and safe total thyroidectomies in patients with thyrotoxicosis or with agranulocytosis in the setting of thyrotoxicosis (14). A recent retrospective study in the United States on 165 patients who underwent total thyroidectomy demonstrated that of the 42% of patients who were hyperthyroid on the day of surgery, although 37% developed some form of complication, none of them developed thyroid storm (14).

This case presents the unique challenges of managing thioamide-induced agranulocytosis complicated by thyrotoxicosis and sepsis. The concern for emerging thyroid storm during admission added complexity to the decision to proceed with early thyroidectomy. There were also logistical issues to consider relating to availability of a surgeon experienced in thyroidectomy in thyrotoxic patients, and availability of an operating theatre.

This case validates the role for multi-modal therapy to ameliorate thyrotoxicosis prior to semi-urgent total thyroidectomy. Although thioamide-induced agranulocytosis in the setting of Graves’ disease is rare, there is a risk of rapid deterioration for the patient who develops sepsis in this setting.

There remains a grey area when it comes to safe timing of surgery in a patient with marked Graves’ thyrotoxicosis, and a gap in the knowledge when in comes to recommendations on combined pharmacological anti-thyroid therapy duration in the immediate preparatory phase for surgery. This case demonstrates that semi-urgent thyroidectomy may be safe in the setting of thyrotoxicosis. Non-thioamide based therapies may be of benefit to temporise the clinical state and may reduce the risk of complications.

Written informed consent has been obtained from the patient for publication of the submitted article and the accompanying images. 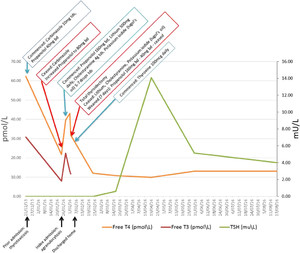