A rare cause of metabolic acidosis: ketoacidosis in a non-diabetic lactating woman

Ketoacidosis occurring during lactation has been described infrequently. The condition is incompletely understood, but it appears to be associated with a combination of increased metabolic demands during lactation, reduction in carbohydrate intake and acute illness. We present a case of a 27-year-old woman, 8 weeks post-partum, who was exclusively breastfeeding her child whilst following a low carbohydrate diet. She developed gastroenteritis and was unable to tolerate an oral diet for several days. She presented with severe metabolic acidosis on admission with a blood 3-hydroxybutyrate of 5.4 mmol/L. She was treated with intravenous dextrose and intravenous sodium bicarbonate, and given dietary advice to increase her carbohydrate intake. She made a rapid and full recovery. We provide a summary of the common causes of ketoacidosis and compare our case with other presentations of lactation ketoacidosis.

Ketoacidosis occurring during lactation has been described infrequently. The condition is incompletely understood, but it appears to be associated with a combination of increased metabolic demands during lactation, reduction in carbohydrate intake and acute illness. We present a case of a 27-year-old woman, 8 weeks post-partum, who was exclusively breastfeeding her child whilst following a low carbohydrate diet. She developed gastroenteritis and was unable to tolerate an oral diet for several days. She presented with severe metabolic acidosis on admission with a blood 3-hydroxybutyrate of 5.4 mmol/L. She was treated with intravenous dextrose and intravenous sodium bicarbonate, and given dietary advice to increase her carbohydrate intake. She made a rapid and full recovery. We provide a summary of the common causes of ketoacidosis and compare our case with other presentations of lactation ketoacidosis.

Ketoacidosis is a common cause of raised anion gap metabolic acidosis. It most frequently occurs in individuals with type 1 diabetes. Starvation commonly causes ketosis but rarely ketoacidosis. Ketoacidosis is more common when women are pregnant due to their relatively insulin-deficient state. There are only a few reported cases of lactation ketoacidosis in the literature. Detailed clinical assessment and correct identification of the underlying cause of the raised anion gap metabolic acidosis are essential to providing the appropriate treatment as ketoacidosis in the lactating woman is rapidly reversible with appropriate treatment.

A 27-year-old lady, 8 weeks post-partum, presented with a four-day history of nausea and vomiting. She described a variety of non-specific symptoms including general malaise, polydipsia, polyuria, fatigue, headache and generalised body aching. Due to her condition, she had been unable to tolerate any food intake in the preceding four days. She had no significant past medical history and took no prescribed medications or recreational substances. She did not drink excessive quantities of alcohol. The patient had strictly followed a low carbohydrate diet for two years. She described herself as being in a state of ‘safe ketosis’ as a result of her diet. Her approximate daily macronutrient targets were as follows: carbohydrate 10%, fat 70% and protein 20%. Her average carbohydrate intake was 20 g per day. Due to her malaise in the days preceding admission, her carbohydrate intake had been reduced to 15–17 g per day.

Her pregnancy had been uncomplicated. She had a normal vaginal delivery of her child and had been well post-partum. She had been exclusively breastfeeding her child since birth. The child had been healthy until the preceding week when he contracted rotavirus. This illness had resolved but the child was unsettled in the day preceding the admission of the patient.

The patient had unremarkable physical observations with a respiratory rate of 20 breaths per minute, oxygen saturations 100% on room air, heart rate 82 beats per minute, blood pressure 115/57 mmHg and she was apyrexial with a temperature of 35.6°C. Her capillary blood glucose was 6.7 mmol/L. The patient was mildly disorientated with no focal neurological finding. Her abdomen was soft with mild right upper quadrant tenderness. Her BMI was 23.0 kg/m2.

The patient was diagnosed with ketoacidosis secondary to lactation on a background of gastroenteritis and low carbohydrate diet. The patient was transferred to the Intensive Care Unit. She was rehydrated with 0.9% normal saline. On diagnosis of ketoacidosis, she was treated with an infusion of 10% dextrose and intravenous sodium bicarbonate, and advised to discontinue breastfeeding during the illness. The acidosis and ketonaemia rapidly resolved (Figs 1 and 2). The patient was established on an oral diet. Upon dietician review, she was advised to increase her carbohydrate and calorie intake significantly.

The patient was discharged home on day 4 of her admission after a full recovery.

Ketone bodies (acetoacetate, 3-hydroxybutyrate and acetone) are produced during times of carbohydrate deficiency in healthy individuals in order to spare glucose utilisation and reduce protein breakdown (1). The rate of ketogenesis is dependent on hormone-sensitive lipase, acetyl-CoA carboxylase and mitochondrial-3-hydroxyl-3-methylglutaryl-CoA synthase. The concentration of circulating ketone levels in blood is controlled by insulin, which inhibits ketogenesis, while epinephrine and glucagon stimulate the process. A low insulin:glucagon ratio will favour ketogenesis. Rapid pathological production of acetoacetate and 3-hydroxybutyrate results in a large hydrogen-ion load, which can cause metabolic acidosis with a raised anion gap.

Ketoacidosis is a common cause of raised anion gap metabolic acidosis with a wide differential diagnosis. It most frequently occurs in diabetic ketoacidosis (DKA). DKA arises due to a partial or complete deficiency in insulin and raised counter-regulatory hormones (1). Therefore, it is most common in patients with type 1 diabetes who have autoimmune destruction of the insulin producing beta-cells within the pancreas. Additionally, it can occur in ketosis-prone type 2 diabetes, and with euglycaemia in SGLT-2 inhibitor-associated DKA and type 1 diabetes with a reduction in carbohydrate intake with continued insulin administration (2, 3). Diabetes was excluded in our case by the patient being normoglycaemic.

After DKA, the most common cause of ketoacidosis is alcohol. The pathophysiology of alcohol-induced ketoacidosis is complex and is caused by a combination of three factors: starvation, elevated NADH/NAD+ ratio and excess counter-regulatory hormones (1, 4). Other causes of toxic ketoacidosis include isopropyl alcohol ingestion and salicylate poisoning. Toxic ketoacidosis was excluded in our case through normal screening investigations.

Our patient had been unable to tolerate an oral diet in the days preceding admission and raised ketones are a feature of starvation (5). However, acidosis in this state is infrequently described. When present, it is generally only mild, in contrast to our case. The low blood glucose during starvation leads to a reduction in insulin secretion, a decreased insulin: glucagon ratio and depletion of glycogen. Ketone bodies can be detectible after short periods of starvation but maximal levels require several weeks of fasting. Starvation acidosis is a common occurrence in infants. However, in adults, it generally requires further stress on metabolic demands precipitated by another co-factor, such as alcohol, gastric banding or pregnancy (6).

Pregnancy is associated with an elevation of maternal ketone levels at baseline (1). Pregnancy is a relatively insulin-deficient state, primarily due to placentally derived hormones including glucagon, cortisol and human placental lactogen (7). There is an exaggerated response to starvation during pregnancy. In addition, there is a state of respiratory alkalosis in late pregnancy, which is compensated for by excretion of bicarbonate by the kidneys leading to reduced plasma bicarbonate concentration and reduced buffering capacity. A relatively short period of starvation under these conditions can lead to severe metabolic acidosis. Interestingly, our case suffered no apparent negative sequelae following a low-carbohydrate diet during her pregnancy. There are numerous case reports of starvation ketoacidosis in the literature. Ketoacidosis is also more common in those with diabetes during pregnancy (8). It can occur with gestational, type 1, type 2 and steroid-induced diabetes. The condition is particularly challenging because it can occur at blood glucose levels lower than in non-pregnancy diabetic women. It is associated with maternal and fetal mortality.

Ketoacidosis in the lactating woman was first described 25 years ago (9). Ketosis has been well described in the veterinary literature of lactating cows. The disorder presented in our case has consequently been termed ‘bovine ketosis’. Lactation in humans is generally resistant to caloric insufficiency as additional energy reserves are normally met from diet, body fat and energy-sparing metabolic adaptations (10). Lactation is only compromised by severe or long-term starvation.

To date, there have been only a few reported cases of ketoacidosis in the lactating woman (9, 11, 12, 13, 14, 15, 16, 17, 18). The majority of cases had a precipitating factor leading to ketoacidosis, most commonly a reduction in caloric, or carbohydrate, intake. Similar to other cases, our patient likely developed ketoacidosis as a result of their low-carbohydrate diet. Reasons for a reduction in carbohydrate and caloric intake in other cases include intercurrent illness and one patient being ‘nil by mouth’ in small bowel obstruction. Mohammed et al. have performed two studies, which showed that in lactating women with a low carbohydrate diet or a 42-h fast, there was reduced carbohydrate oxidation and increased fat oxidation causing a significant increase in 3-hydroxybutyrate levels compared with non-lactating women (19, 20). Therefore, either starvation or a reduced carbohydrate diet may put women at risk of ketoacidosis. This is likely to be compounded when these factors are combined as our case demonstrates.

The clinical presentation of all cases with lactation ketoacidosis has been non-specific. Patients have presented with a variety of symptoms including vomiting, abdominal pain, malaise and dyspnoea (9, 11, 12, 13, 14, 15, 16, 17, 18). Making the diagnosis relies on the clinical acumen of the admitting team. As in our case, approximately half of the cases describe a severe acidosis, with pH <7.1. The severity of the acidosis is variable: the most severe described case had a pH of 6.64 (13).

Our case improved rapidly with treatment. Initially she was rehydrated to reverse pre-renal renal impairment and support urinary clearance of ketones. On detection of ketoacidosis, she was treated with intravenous dextrose and an oral diet with a higher proportion of carbohydrate intake was instigated. Sodium bicarbonate use is controversial in metabolic acidosis, in particular in diabetic ketoacidosis, but there appeared to be no negative sequelae in our case as a result of this treatment (21). Other case reports have described the use of sodium bicarbonate in this condition. However, treatment should focus on reversal of ketogenesis. All reported cases have described reversal of ketoacidosis with use of intravenous dextrose and appropriate oral or enteral diet. In order to reduce the risk of further ketosis, we advised the patient to alter her diet, increasing her carbohydrate intake. Despite the severity of the acidosis described within the literature, all reported cases have resulted in a rapid and full recovery.

In conclusion, ketoacidosis in the lactating woman is a rare clinical presentation. It seems to be associated with starvation and low-carbohydrate diets. To date, there have only been a few reported cases and no fatalities. However, low-carbohydrate diets are prevalent and weight loss is important to many women post-partum. This condition should be considered in unwell lactating women as it is rapidly reversible with appropriate treatment.

Written informed consent has been obtained from the patient for publication of the submitted article and accompanying images.

Gordon Sloan is the primary author. Amjad Ali is the secondary author. Jonathan Webster is the named Physician. 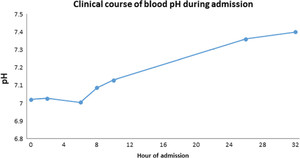 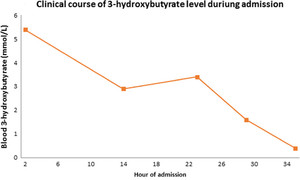