A 50-year-old woman with thyroid-stimulating hormone (TSH)-producing pituitary adenoma (TSHoma) was diagnosed due to symptoms of thyrotoxicosis. Preoperatively, she showed thyrotoxicosis with the syndrome of inappropriate secretion of TSH (SITSH) and had a 5 cm nodule in her thyroid gland. Octreotide was administered preoperatively, which helped lower her serum TSH level but not her thyroid hormone level. These findings were atypical for a patient with TSHoma. The TSHoma was completely resected, and the TSH level dropped below the sensitivity limit shortly after surgery. Interestingly, however, thyroid hormone levels remained high. A clear clue to the aetiology was provided by consecutive thyroid scintigraphy. Although preoperative thyroid scintigraphy did not show a hot nodule and the mass was thought to be a non-functional thyroid nodule, the nodule was found to be hot in the postoperative phase of TSH suppression. By focusing on the atypical postoperative course of the TSHoma, we were able to conclude that this was a case of TSHoma combined with an autonomously functioning thyroid nodule (AFTN).

A 50-year-old woman with thyroid-stimulating hormone (TSH)-producing pituitary adenoma (TSHoma) was diagnosed due to symptoms of thyrotoxicosis. Preoperatively, she showed thyrotoxicosis with the syndrome of inappropriate secretion of TSH (SITSH) and had a 5 cm nodule in her thyroid gland. Octreotide was administered preoperatively, which helped lower her serum TSH level but not her thyroid hormone level. These findings were atypical for a patient with TSHoma. The TSHoma was completely resected, and the TSH level dropped below the sensitivity limit shortly after surgery. Interestingly, however, thyroid hormone levels remained high. A clear clue to the aetiology was provided by consecutive thyroid scintigraphy. Although preoperative thyroid scintigraphy did not show a hot nodule and the mass was thought to be a non-functional thyroid nodule, the nodule was found to be hot in the postoperative phase of TSH suppression. By focusing on the atypical postoperative course of the TSHoma, we were able to conclude that this was a case of TSHoma combined with an autonomously functioning thyroid nodule (AFTN).

Thyroid-stimulating hormone (TSH)-producing pituitary adenoma (TSHoma) is a relatively rare functional tumour that accounts for 0.5–3% of pituitary adenomas (1). The disease may be associated with symptoms of thyrotoxicosis, such as tachycardia and hyperhidrosis, as well as headache and visual field disturbances due to the mass effect of the tumour. Eighty-five per cent of patients with TSHoma present with diffuse goitre (2), often associated with nodules in the thyroid gland. However, the function of thyroid nodules is not well described.

On the other hand, autonomously functioning thyroid nodules (AFTNs) are caused by gain-of-function somatic mutations of the TSH receptor (TSHR) or α subunit of GTP-binding protein (GNAS) that lead to thyrotoxicosis independent of TSH (3). AFTNs are more common in areas with iodine deficiencies and less common in areas with excessive iodine intake, including Japan. AFTNs usually present with findings of primary hyperthyroidism and are diagnosed by thyroid scintigraphy, which shows thyroid lesions as hot nodules.

The present case is a rare combination of TSHoma and an AFTN. AFTN was not diagnosed preoperatively in the presence of TSHoma, and the atypical preoperative and postoperative course of the patient revealed the diagnosis of AFTN. Herein, we report this educational case.

A 50-year-old woman visited her previous doctor with complaints of palpitations, neck swelling and excessive sweating. These symptoms appeared 5 years earlier and gradually worsened. She had no notable medical or family history. She did not have any history of smoking or drinking. Her pulse was 92 b.p.m., and a nodule was palpable on her thyroid gland. There was no weight loss.

Thyroid function tests performed by the previous doctor showed high FT3 and FT4 levels and inadequate suppression of TSH on multiple occasions, which was a finding of syndrome of inappropriate secretion of TSH (SITSH) (Table 1). Moreover, both TRAb and TSAb were negative, while TPOAb and TgAb were both positive. There were no other abnormalities in the other pituitary hormone levels, general blood samples, or the TRβ1 gene. Pituitary MRI revealed a 5-mm tumour with poor enhancement on contrast-enhanced T1-weighted images (Fig. 1). The TRH loading test resulted in a low response for TSH (1.093–1.771 mIU/L). Based on these data, the patient was diagnosed as TSHoma and came to our hospital for pituitary surgery.

The kits for the measurement of TSH, FT3 and FT4 are as follows. ARCHITECT (Abbott, Japan) at the previous hospital, and lumipulse Presto II (Fujirebio, Japan) after admission to our hospital.

Since the patient showed thyrotoxicosis upon admission, we prescribed potassium iodide 100 mg daily and subcutaneous injections of octreotide 300 μg per day for 3 days to normalise her thyroid function before surgery. The TSH decreased to substandard values, but interestingly, serum FT3 and FT4 levels remained unchanged. With extreme care, the surgery for TSHoma was performed as planned, and the tumour was completely removed without complications. The resected tumour was found to be a TSH-, PRL-, PIT-1-, and somatostatin receptor 2A (SSTR2A)-positive adenoma by immunostaining, whereas it was GH-negative. The diagnosis of TSHoma was confirmed based on these results (Fig. 3).

Complications of destructive thyroiditis were suspected 99mTcO4 scintigraphy was performed on postoperative day 12. The scan showed accumulation in both normal thyroid glands and nodules, which was not compatible with destructive thyroiditis. Furthermore, 1 month later, suppression of serum TSH and elevated FT3 and FT4 levels persisted. Therefore, 131I scintigraphy was performed on postoperative day 27. Although we could not find a 'hot nodule' in thyroid scintigraphy before the operation (Fig. 2C), as shown by single-photon emission CT/CT, the area with strong signal shifted from the normal thyroid gland to the nodule, and the signal in the normal thyroid was diminished (Fig. 2D). This result led us to the diagnosis of AFTN. The patient was treated temporarily using methimazole (MMI), and radio-isotope treatment was performed in accordance with her choice. The nodule has been cytologically confirmed to be benign.

TSHoma can cause hyperthyroidism due to the autonomous secretion of TSH. The median serum TSH level upon TSHoma diagnosis is 3.08 μIU/mL, while TSH levels only exceed the upper limit of the reference value in approximately 30% of TSHomas (2). Therefore, the key to diagnosing TSHoma is not the presence of a high serum TSH level but rather an inappropriately suppressed TSH level, that is, SITSH, which should not be missed. The first-line treatment for TSHoma is surgical removal of the tumour. It is also important to address thyrotoxicosis prior to surgery. Somatostatin analogues, such as octreotide and lanreotide, act on tumour-expressed SSTR2 and reduce hormone synthesis, thus shrinking the size of the tumour. Octreotide lowers serum TSH levels and normalises thyroid function in more than 80% of TSHomas (4).

In the present case, octreotide certainly lowered the serum TSH level, but not FT3 or FT4 levels, which indicated an atypical course. This course itself suggested the autonomous secretion of thyroid hormones by AFTNs, which we noted in hindsight. Furthermore, the preoperative thyroid scintigraphy in this case did not show any hot nodules that could be diagnosed as AFTNs. Normally, thyroid hormones secreted by AFTN cause negative feedback to the normal pituitary gland, resulting in suppressed hormone production by the normal thyroid gland. In our case, however, TSH was also autonomously secreted from the pituitary tumour, suggesting that hormone production in the normal thyroid gland was not suppressed. One month after surgery, when the serum TSH level was markedly reduced and the patient showed findings of primary hyperthyroidism, we performed repeat thyroid scintigraphy. The uptake of radioactive iodine in the normal thyroid gland was suppressed, and the thyroid nodules were depicted as hot nodules. The nodules were found to be functional only after surgery to remove a pituitary tumour.

At first, we speculated that painless thyroiditis might be the cause of the thyroid hormone changes after TSHoma surgery in this case because we had used potassium iodide preoperatively. Potassium iodide impairs the organisation of thyroid hormones and inhibits the synthesis of thyroid hormones; thus, it is frequently used in thyroid crisis and severe Graves' disease to rapidly stabilise thyroid function in Japan. However, there is a case report of Lugol's solution-induced painless thyroiditis (5). While rare, we have also experienced iodine-induced thyrotoxicosis. Therefore, thyroid scintigraphy was performed on postoperative day 12. The results showed a negative result of painless thyroiditis. Taken together, the scintigraph images on day 12 captured the process of dynamic changes in thyroid function following the suppression of TSH. A limitation of this report, however, is that we used different radionuclides for the preoperative and postoperative thyroid scintigraphy. Therefore, we cannot exclude the possibility that the difference of nuclides might had affected the intensity of the accumulation.

Case reports of AFTN combined with TSHoma are rare, likely because TSHoma is an uncommon disease. The first report of this combination was published in 1994 (6). Although that report did not mention that the tumour was completely resected, the diagnosis of AFTN was made sometime after the TSH level declined with surgery. More recently, Aksoy et al. reported a woman diagnosed with toxic multinodular goitre (TMNG) 2 months after trans-sphenoidal surgery (TSS) for a TSH and growth hormone (GH)-secreting pituitary adenoma (GHoma), with a rapid decrease in TSH levels and the appearance of thyrotoxic symptoms (7). Similar to our case, this patient did not show uptake in the thyroid nodule on preoperative scintigraphy. Active somatic mutations in TSH receptors (TSHR) and GNAS have been identified in a large proportion of AFTNs. However, whole-genome analysis of TSHoma has not revealed mutations in the genes associated with G protein (8); thus, the involvement of genetic mutations shared by AFTNs and TSHoma is unknown.

On the other hand, approximately half of GHomas, which are induced to differentiate by the same transcription factor as TSHomas (PIT-1), have active GNAS mutations. Furthermore, McCune-Albright's syndrome, a mosaic mutation of GNAS, is associated with GHoma and AFTNs. In this patient, there were no physical findings of acromegaly, and immunostaining was negative for GH staining.

In this case, it was difficult to evaluate the function of the thyroid nodules preoperatively due to the development of autonomous hormone secretion in multiple organs: the pituitary and thyroid. While paradoxical, this case clearly illustrates how the diagnosis of AFTNs is dependent on TSH levels. Additionally, it is important to return to the basics and re-evaluate the diagnosis when facing a course of events not centrally explained.

Written signed consent has been obtained from the patient for publication of the submitted article. 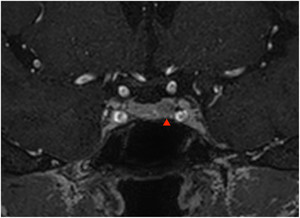 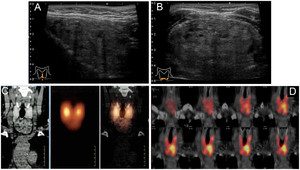