We observed a novel therapeutic response with cabergoline in a male patient with a dopamine-secreting head and neck paraganglioma (HNPGL), macroprolactinoma and germline succinate dehydrogenase C mutation (SDHC). The macroprolactinoma was treated with cabergoline which gave an excellent response. He was found to have raised plasma 3-methoxytyramine of 1014 pmol/L (NR: 0–180 pmol/L); but it was unclear if this was a drug-induced phenomenon from dopamine agonist (DA) therapy. Cabergoline was stopped for 4 weeks and the 3-methoxytyramine level increased significantly to 2185 pmol/L, suggesting a biochemical response of his HNPGL. Subsequently, Gallium-68 Dotatate PET and MRI (Gallium-68 Dotatate PET/MRI) demonstrated a second lesion in the sacrum. Both the HNPGL and metastatic sacral deposit received external beam radiotherapy with a good biochemical and radiological response.

We observed a novel therapeutic response with cabergoline in a male patient with a dopamine-secreting head and neck paraganglioma (HNPGL), macroprolactinoma and germline succinate dehydrogenase C mutation (SDHC). The macroprolactinoma was treated with cabergoline which gave an excellent response. He was found to have raised plasma 3-methoxytyramine of 1014 pmol/L (NR: 0–180 pmol/L); but it was unclear if this was a drug-induced phenomenon from dopamine agonist (DA) therapy. Cabergoline was stopped for 4 weeks and the 3-methoxytyramine level increased significantly to 2185 pmol/L, suggesting a biochemical response of his HNPGL. Subsequently, Gallium-68 Dotatate PET and MRI (Gallium-68 Dotatate PET/MRI) demonstrated a second lesion in the sacrum. Both the HNPGL and metastatic sacral deposit received external beam radiotherapy with a good biochemical and radiological response.

HNPGL are NETs, arising from parasympathetic ganglia in the neck and skull base. These tumours present mainly with non-specific symptoms, including painless neck masses compressing the cranial nerves or invading the skull base. It has been reported that up to one-third of HNPGL patients have biochemically active tumours producing 3-methoxytyramine (1), which is a metabolite of dopamine. The increased production of dopamine has been shown to be an independent marker for metastatic disease (2).

Several NETs exhibit dopamine D2 and D4 receptors, including pheochromocytoma (PCC) and paraganglioma (PGL) (3,4), suggesting that these tumours might be amenable to dopaminergic therapy.

In our case report, we present a possible therapeutic response in a patient with dopamine-secreting HNPGL and a pituitary adenoma associated with germline SDHC mutation. We observed a novel association of decreased plasma 3-methoxytyramine with cabergoline administered for pituitary macroprolactinoma. This case is also unique, it highlights the rare association of metastatic disease from HNPGL with pituitary adenoma and SDHC mutation.

A 64-year-old man presented in 1993 with swallowing difficulties caused by HNPGL. He underwent two trans-temporal resections in 1993 and 2000; complete excision of the tumour was not possible due to its size and proximity to crucial neck structures. The residual disease remained stable and was monitored with regular MRI under the Ear, Nose and Throat surgeons. In 2008, a surveillance MRI demonstrated an incidental pituitary macroadenoma (Fig. 1). Apart from occasional headaches, he had no history of hypertension, palpitations or sweating to suggest catecholamine overproduction. On examination in 2008, his blood pressure was 112/78 mmHg and pulse rate of 90 b.p.m. He had normal visual fields, but residual right-sided 7th, 9th, 10th, 11thand 12th cranial nerves deficits due to previous surgeries.

His pituitary profile showed a markedly raised prolactin of 43 000 mIU/L (NR: 86–324 mIU/L). The patient was then referred to endocrinology and started on cabergoline 0.5 mg weekly; the macroprolactinoma demonstrated an excellent response with normalisation of serum prolactin within 1 year. MRI scan in 2011 (Fig. 1) showed a significant reduction in prolactinoma size from baseline; the cabergoline dose was subsequently reduced to 0.25 mg weekly.

Interestingly, his family history revealed a brother with a diagnosis of HNPGL and a maternal cousin with non-functioning pituitary adenoma (NFPA), both were in their fifties. Genetic testing found that our index case harboured a novel missense variant in SDHC gene c.380A>G (p.His127Arg) with a gnomAD minor allele frequency of 0.0000315. The same genetic alteration was found in his brother with paraganglioma. The proband’s mother, aunt, sister, two nephews and one niece are carriers of the same mutation but have no clinical manifestation to date while the cousin with NFPA had no SDHC gene alteration detected, he was considered to represent a phenocopy. No mutations were identified in multiple endocrine neoplasia 1 gene (MEN 1) and Aryl hydrocarbon receptor interacting protein (AIP) gene in the proband or his family members. Family pedigree is shown in Fig. 2.

In May 2012, he complained of occasional headaches, but no other symptoms. His PGL showed radiological evidence of progression and compression of the right internal carotid artery. At this stage, the biochemical assessment of the PGL was performed for the first time. He had normal plasma metanephrine at 377 pmol/L (NR: 80–510 pmol/L) and normetanephrine at 284 pmol/L (NR: 120–1180 pmol/L) but raised 3-methoxytyramine concentration at 1014 pmol/L (NR: 0–180 pmol/L). We questioned if the isolated rise in 3-methoxytyramine was a drug-induced phenomenon caused by DA. Cabergoline was temporarily stopped for 4 weeks; plasma 3-methoxytyramine level increased substantially to 1965 pmol/L and 2185 pmol/L at 2 and 4 weeks of ceasing the drug, respectively. After restarting cabergoline, plasma 3-methoxytyramine dropped down and returned to the previously raised level (Fig. 3). Elevated 3-methoxytyramine was concerning as the metabolite is considered a marker for metastatic disease in PPGLs (2). Subsequently, functional imaging with Gallium-68 Dotatate PET/MRI demonstrated avid uptake at his residual neck disease and a small focus of uptake in the sacral body (S2) suggestive of metastatic focus (Fig. 4). To further characterise the lesion, an MRI of the sacrum with diffusion sequences showed a 7 × 12 mm lesion compatible with PGL deposit. A sacral biopsy was not attempted because of the small size and high risk of neural injury.

The patient continued on cabergoline 0.25 mg weekly and received 50.4 Gray of fractionated external beam radiotherapy to both skull base and the sacral lesions in December 2015.

Cabergoline is an ergot-derived dopamine 2 (D2) receptor agonist. Some studies have reported the expression of D2 receptors in various NETs including gastrointestinal, pancreatic and bronchial NETs and PCC (3,5). Saveanu et al. (4) studied 52 patients with PPGLs including patients with SDHB and SDHD mutation, all tumours expressed high levels of D2 mRNA as surrogate evidence of D2 receptors. Their data showed that D2 is expressed in PGL at high levels (though not as high as PCC). It has been shown that the activation of dopamine receptors inhibits endogenous dopamine release with the subsequent reduction of dopamine metabolism to its metabolites including 3-methoxytyramine (6). The evidence of antisecretory and possibly antiproliferative effect of DA has been seen in ACTH-secreting bronchial NETs (5) and metastatic islet cell tumours (7). However, the effect of D2 receptor agonists remains uncertain in PPGLs but may have clinical relevance in treating dopamine secreting PPGLs.

Exclusive dopamine-secreting PPGLs differ in the clinical presentation when compared with other catecholamine-producing counterparts. These tumours are typically associated with extra adrenal location and have more metastatic potential than other catecholamine-secreting tumours (2). This behaviour has been attributed to poor cellular differentiation and delayed clinical presentation due to the absence of symptoms. Elevated plasma 3-methoxytyramine can be considered as an independent marker of metastatic potential and can increase up to five-fold in patients with metastasis compared to those without (2). Our patient was normotensive and asymptomatic from dopamine excess; the effect of cabergoline on his 3-methoxytyramine is clearly demonstrated. It is unclear if the use of DAs had a definite effect on his tumour control/progression or likely response to radiotherapy. To date, no further metastasis has been detected. It would be of interest to explore the antiproliferative effects of DAs in dopamine-secreting PPGLs.

The association of PCC or PGL and pituitary adenoma is now a well-described rare (<1%) association, designated as the three P association or '3PA'. PGLs associated with SDHC mutation classically present with isolated asymptomatic, non-functional HNPGL. The first case of metastatic PGL with distant metastases caused by SDHC mutation was described in 2014 by Bickman et al. (8). Subsequently, others have also published metastatic PGL in SDHC (9,10). In our patient, the relationship of pituitary tumour and SDHC remains undefined, as loss of heterozygosity or a second somatic mutation study is not available as the macroprolactinoma was treated medically.

Our case highlights the rare potential of germline SDHC mutations causing metastatic HNPGL with concurrent prolactin-secreting pituitary tumours and an interesting effect on 3-methoxytyramine with the use of DA. Cabergoline treatment may lower elevated 3-methoxytyramine levels but equally, it could mask the biochemical evidence of metastasis. Therefore, Gallium-68 Dotatate PET/MRI scanning provides better evidence of metastatic disease.

The authors declare that there is no conflict of interest that could be perceived as prejudicing the impartialsity of the research reported.

Patient consent has been obtained.

This family pedigree chart demonstrates the family history of the index patient who is marked with an arrow. NFPA, non-functioning pituitary adenoma; PGL, paraganglioma. 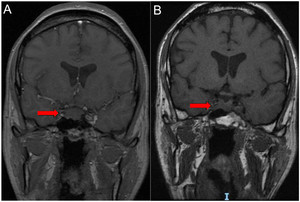 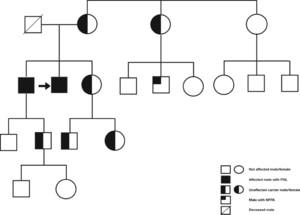 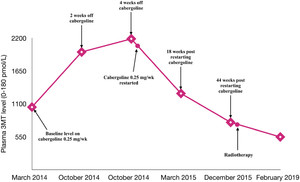 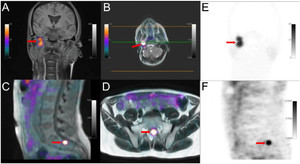