We report a rare case of posterior reversible encephalopathy syndrome (PRES), precipitated by ectopic Cushing’s syndrome, in a patient with a metastatic pancreatic neuroendocrine tumour. A 55-year-old female presented as a hypertensive emergency with seizures and severe biochemical disturbance, including alkalosis, hypokalaemia and hyperglycaemia. MRI showed vasogenic oedema in the parieto-occipital region, consistent with a diagnosis of PRES. She had a significantly raised serum cortisol (>6000 nmol/L) which did not suppress with dexamethasone. Plasma adrenocorticotropic hormone (ACTH) concentrations were neither suppressed nor raised but were consistently within the normal reference range. The unexpected finding of a normal ACTH may be explained by either tumour secretion of unmeasured ACTH-related peptides, immunoassay antibody interference or episodic ACTH secretion. PRES is usually reversible with prompt and appropriate treatment. Hypercortisolism associated PRES is rare and may be associated with a worse outcome.

We report a rare case of posterior reversible encephalopathy syndrome (PRES), precipitated by ectopic Cushing’s syndrome, in a patient with a metastatic pancreatic neuroendocrine tumour. A 55-year-old female presented as a hypertensive emergency with seizures and severe biochemical disturbance, including alkalosis, hypokalaemia and hyperglycaemia. MRI showed vasogenic oedema in the parieto-occipital region, consistent with a diagnosis of PRES. She had a significantly raised serum cortisol (>6000 nmol/L) which did not suppress with dexamethasone. Plasma adrenocorticotropic hormone (ACTH) concentrations were neither suppressed nor raised but were consistently within the normal reference range. The unexpected finding of a normal ACTH may be explained by either tumour secretion of unmeasured ACTH-related peptides, immunoassay antibody interference or episodic ACTH secretion. PRES is usually reversible with prompt and appropriate treatment. Hypercortisolism associated PRES is rare and may be associated with a worse outcome.

Approximately 1% of all pancreatic tumours are functioning neuroendocrine tumours (p-NETs) (1). P-NETs are known to secrete a variety of hormones including insulin, gastrin, vasoactive intestinal peptide (VIP), somatostatin, glucagon, pancreatic polypeptide (PP) and more rarely adrenocorticotropic hormone (ACTH). They typically present with advanced metastatic disease and their localisation often precedes hormone secretion. ACTH-secreting p-NETs normally result in a fulminant Cushing’s syndrome (CS) and are associated with an increased mortality in comparison with other aetiologies of hypercortisolism (2). Patients usually develop profound metabolic disturbance with alkalosis, hypokalaemia, hypertensive crisis and hyperglycaemia. When surgical resection of p-NETs is not achievable, there are limited effective systemic therapies and their management is often challenging (1).

Posterior reversible encephalopathy syndrome (PRES) is a clinicoradiographic disorder, characterised by a subacute presentation of headache, visual disturbance, encephalopathy, seizures, focal neurological deficits and hypertensive emergency (3). Neuroimaging shows vasogenic oedema with a parieto-occipital pattern and bi-hemispheric distribution (3). Recognition of PRES is critical as both radiographic and clinical characteristics are usually reversible with appropriate treatment. Hypercortisolism associated with malignancy has been rarely described as a cause of PRES, with only two cases (related to breast and lung cancers) being published previously (4, 5). Herein, we report the first case of PRES, precipitated by ectopic Cushing’s syndrome (ECS) arising from a metastatic p-NET, with unexpectedly normal laboratory ACTH levels.

A 55-year-old Afro-Caribbean woman presented to a UK teaching hospital with a 1-day history of tonic-clonic seizures. On examination, she was jaundiced and comatose with a Glasgow Coma Scale of 3 but had no focal or lateralising neurology. She was hypertensive with a blood pressure of 197/95 mmHg. She had a medical history of a T4N1M1 pancreatic neuroendocrine tumour, diagnosed 6 months prior to presentation. The tumour showed a somatostatin receptor avidity on gallium-68 DOTATATE scanning and had a Ki67 index of 8.1% on biopsy. Whilst chromogranin A levels had been elevated at 27.8 nmol/L (normal range 0–6), chromogranin B and gut hormone levels, including glucagon, VIP, PP and somatostatin, had been within normal reference ranges and she had not exhibited any clinical features of a hormone hypersecretion syndrome. Her initial treatment had been with chemotherapy (Capecitabine and Temozolomide) and a somatostatin analogue (Lanreotide autogel). She had developed progressive disease with poor tolerability of chemotherapy and had been planned for peptide receptor radionuclide therapy with Lutathera (Lutetium oxodotreotide); however, neither this nor any other targeted therapy had been commenced prior to her presentation.

Initial laboratory tests revealed a profound metabolic disturbance with deranged liver function tests and coagulopathy. The potassium, sodium, bilirubin levels were 2.8 mmol/L, 154 mmol/L, 224 mg/dL, respectively, and the INR was 3.2. Venous blood gas analysis revealed an alkalosis pH 7.5 with a bicarbonate of 46 mmol/L and blood glucose was 20 mmol/L. CT scanning of the brain showed a widespread vasogenic oedema suggestive of PRES. Subsequent MRI showed symmetric confluent areas of signal abnormality in the cerebral white matter further in keeping with this diagnosis (Fig. 1). CT imaging of the chest, abdomen and pelvis revealed an interval enlargement of the uncinate process pancreatic lesion and adjacent lymph nodes with stable bilobar hepatic metastasis and no evidence of biliary obstruction. Imaging of the adrenal gland was normal. Further laboratory investigations showed a significantly elevated cortisol of 6078 nmol/L (Fig. 2A) but an inappropriately normal ACTH of 13 ng/L. Repeat ACTH testing was 24 ng/L. The patient was commenced on dexamethasone (2 mg three times a day) which did not suppress the serum cortisol level.

The patient was intubated for airway protection and to instigate neuroprotective ventilation. She was transferred to the intensive care unit where initial medical management consisted of i.v. levetiracetam, dexamethasone, labetalol, insulin, dextrose and potassium replacement. She was subsequently commenced on metyrapone (750 mg three times a day) to maintain cortisol in the range of 100–200 nmol/L and given an octreotide infusion (50 mcg/hr) to inhibit neuroamine secretion and as an antiproliferative agent.

On day 10 post-admission, there had been poor neurological recovery despite the optimisation of her blood pressure and electrolytes (Fig. 2B). She had progressively worsening liver function with a bilirubin of 432 mg/dL, which precluded consideration of any further anti-cancer therapy. Due to the limited further therapeutic options, her unlikely neurological recovery and worsening malignant disease, the active treatment was withdrawn. She was extubated, palliative medication was prescribed, and she died 29 days following admission.

Whilst the pathophysiology of PRES is not fully understood, endothelial dysfunction is thought to lead to increased vascular permeability and subsequent vasogenic oedema. This may occur secondary to systolic hypertension with cerebral hyperperfusion and interstitial extravasation or endogenous and exogenous toxins that cause direct cytotoxic injury (3). The management of PRES involves the treatment of seizures and optimisation of blood pressure and biochemical disturbance. When unrelated to ECS, its prognosis is generally favourable if treatment is initiated before irreversible brain damage occurs.

In ECS secondary to p-NETs, a raised ACTH level would usually be expected, and this is indicated in standard diagnostic algorithms (6). However, one case series of 90 patients with ECS found that 1/3 had a normal basal ACTH level (7). This finding may be explained by either ACTH-related peptides (ACTHrps), immunoassay interfering antibodies or episodic ACTH secretion.

Parathyroid hormone-related peptides are a well-described phenomenon in the context of malignant hypercalcaemia but ACTHrps are less commonly discussed in the scientific literature. ACTH is formed following the cleavage of its precursor protein pro-opiomelanocortin (POMC) by pro-hormone convertase 1 (8). Further cleavage to smaller peptides is performed by pro-hormone convertase 2 and subsequent post-translational alteration results in the formation of α-melanocyte stimulating hormone (αMSH) (8) (Fig. 3). As neuroendocrine tumour cells can be poorly differentiated, they exhibit abnormal processing of POMC and a variety of ACTHrps are excreted.

Significantly elevated levels of ACTHrps have been reported in patients with ECS (8, 9) and these have been more strongly associated with the degree of hypercortisolism than ACTH itself (9). In contrast, lower levels have been observed in patients with pituitary-dependent Cushing’s disease, which substantiates aberrant POMC processing outside of the pituitary (8, 9). When investigating the role of ACTHrps in the differential diagnosis of ACTH-dependent CS, Oliver et al. (8) concluded that the measurement of ACTHrps outperformed inferior petrosal sampling. These findings have led some authors to suggest that the ectopic ACTH syndrome should be more accurately described as the ‘ectopic ACTH precursor syndrome’ (9). However, ACTHrps were not investigated for in our case, due to a lack of widespread availability of testing, and the clinical consensus that it would not alter management.

A third possible explanation is episodic ACTH secretion. It is known that ACTH secretion can be episodic or cyclical in all types of Cushing’s syndrome, and a review paper indicates that this occurs in 26% of cases of ECS (13). Whilst this patient did not exhibit episodic symptoms, this does not fully exclude episodic secretion of ACTH.

The optimal management of ACTH-secreting p-NETs is surgical resection of the neuroendocrine tumour. In non-operable cases, the aim of the treatment is to inhibit hormone secretion and to prevent tumour progression. Changes in tumour functionality due to cell pluripotency can complicate management (1). As in this case, tumours expressing somatostatin receptor 2 and 5 can be treated with somatostatin analogues, which inhibit both tumour growth and hormone secretion (1). Systemic anti-cancer therapy involves conventional chemotherapy, mechanistic target of rapamycin (mTOR) inhibitors, small molecule tyrosine kinase inhibitors or radionucleotide therapy when somatostatin receptor scintigraphy or 68Ga-DOTA-peptide-PET/CT is positive.

Pharmacological management of hypercortisolism relies on the inhibition of steroidogenesis, which can be achieved with ketoconazole, metyrapone or mitotane, as monotherapy or in combination. Etomidate or mifepristone are also used. If this is proven ineffective, bilateral adrenalectomy may be required, and this has been shown to improve survival in the first 2 years (14). However overall, there is a lack of evidence-based treatment strategies for ACTH-secreting p-NETs and further studies are needed to establish the best treatment approaches and to improve patient outcomes (1).

There is also limited evidence regarding the prognostic factors that affect patients with ECS due to neuroendocrine tumours. However, severe hypercortisolism, hypokalaemia, distant metastases and a pancreatic primary have all been associated with a worse prognosis (14). These factors were all present in this case and may help explain her poor outcome despite prompt and appropriate management. Whilst PRES associated with ectopic Cushing’s syndrome has been very rarely reported, clinicians should be aware of PRES in this context, as it suggests significant hypercortisolism and may signify a worse prognosis.

Written consent for publication has been obtained from the patient’s next of kin.

Copyright:
This is an Open Access article distributed under a Creative Commons Attribution-NonCommercial-NoDerivatives 4.0 International License. 2021

MRI brain scan showing symmetric, confluent areas of T2 hyperintensity in the cerebral white matter of the frontal, parietal, occipital and lateral temporal lobes bilaterally. The signal change predominately involves the deep and subcortical white matter and shows corresponding free diffusion with a few small, superimposed foci of restricted diffusion. Multiple foci of abnormal susceptibility are shown within some of these areas of white matter signal change, mainly in the parietal and occipital lobes. 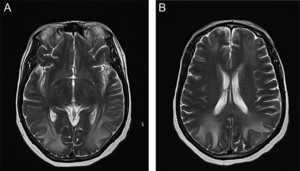 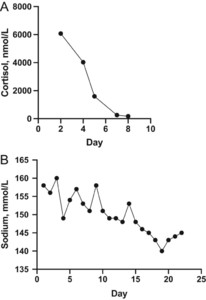 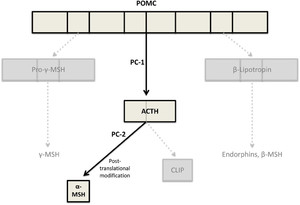